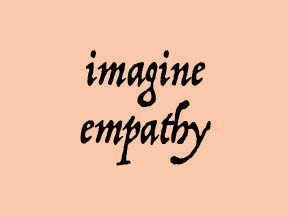 Disappointed in the cold heart of Seattle’s mayor regarding homeless people, last summer I made a sign “imagine empathy.”
There has been much heartache and disappointment since Seattle's Mayor Ed Murray declared a crisis in homelessness in fall 2015. Never in my city did I feel the keen division between privilege and vulnerability so acutely. The mayor, a key player in the increasing division through his politics and stratagems to foist a project repeatedly rejected by the residents of Seattle: a tunnel from Battery Street past the waterfront of the downtown to open south of Pioneer Square, then declared this crisis of people living on the street or in their vehicles, possibly in hopes of getting monies from the federal government. Both the tunnel and the declaration of crisis are related; in fact, one birthed the second. Real estate investment in Seattle city demanded there remain valuable water and mountain view property for Stratos dwellers while Washington state legislators, led by then-Senator Murray and the former governor created a transportation corridor below for fast shipping from the Port of Seattle to the northern version of the Inland Empire, and more importantly, fossil fuel to the port.
Now it's time for a reckoning: land lords increasingly convert low cost housing to higher value real estate through price increases, eviction and unfair discriminatory practices. At the same time, tunnel construction, at a snail's pace, has limited housing construction. More people, once residents in rental properties, find themselves couch surfing, dropping in on family members and ultimately living in vehicles or tents on the street. The heartlessness involved in facilitating this process is revealed in the mayor's call for police to sweep communities formed by tent dwellers: they cart cherished belongings to the landfill and he and his minions further oppose any city council legislation to protect the rights of the violated. I wondered, what would empathy look like in this situation? 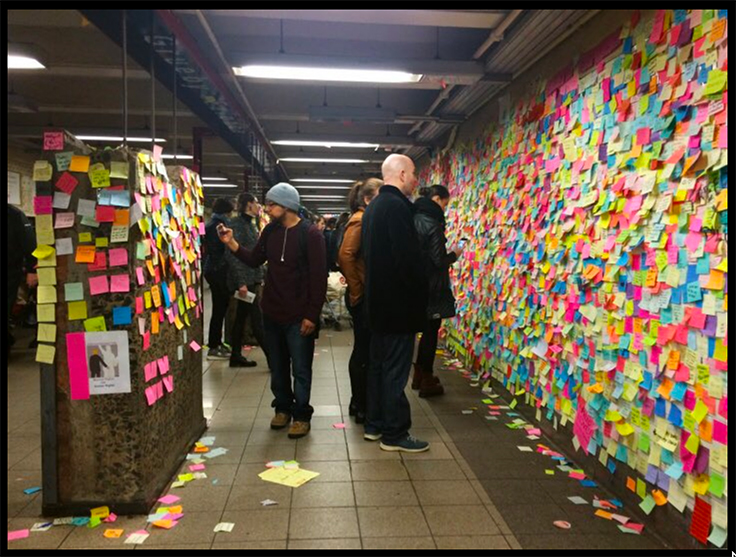 Post-its Protest. Following the 2001 criminal attack in NYC, people posted stickies at Union Square subway station at 14th in Manhattan to express their distraught feelings over the loss of friends and the violation of the city. Recently sticky notes have appeared again in post election Union Square station. Late last year, during protests in Seoul, Korea, stickers with slogans and commentary appeared as signs of mass protest on busses used to block protestors from historical monuments. People expressed their grievances against the Park government and its continual injustice: from protecting the Sewon ferryboat corporate heads to trade deals favoring US agriculture over Korean and increasingly militant postures. As a result, my initial sign has become a sticky note.

Here’s a post-it for you to place.