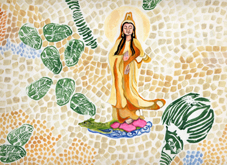 new works: the geology of compassion, seeds are the jewels of the earth, in principio omnes will appear in the exhibition "Radiance" through September 11, 2015 WPW Gallery, Columbia Center, 701 5th Avenue, Suite 310 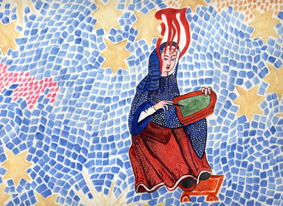 "geology" features images of crinoid and trilobite fossils, "seeds" features seed block prints and an image of scientist and activist Vandana Shiva, "69.85 x 147.32 cm" features stars and Hildegard of Bingen. Another new work, "...Hildegard's Universe" was acquired by a collector.

[detail] The Book of Shadows: seeds are the jewels of the earth, acrylic mixed media on Hanji, 69.85 x 147.32 cm, 2015 The title is a quotation from a talk by Alan Kapular. Details on Planet Art site under Re:Seeding Gaia

What was I thinking?
Various influences converged for me in this series, including some altering of approaches I used previously such as rubber stamps and paint to suggest repetition and uniqueness, titanium coated mica pigments for their reflective properties and a quality of random choice of perspective: the repetition enforces multiple overlaps resulting in no prioritized view.

One important source of this work is the group of color field paintings presented in the exhibition, Garden and Cosmos which appeared at the Seattle Asian Art Museum in 2009. These early 19th C paintings of gold, pink, silver, and other colors illustrated the origins of the cosmos, consciousness and matter. Within the borders of the paintings, as if floating in time and space are figures, one pre-creation, others in the acts of creation. I loved the randomness of space, and the delicate silver brushwork on top of the color suggested the range of universes: micro and macro.

Other resources included a thread I began in making collagraph fossils found in the garden of the bodhisattva of mercy, Guanyin. It was amusing to imagine the fossil record as stones in a garden created by compassion for those who came after, clues to the origins of life. The fossil trilobite images are derived from those we saw on a family trip in the Mt. Stephen trilobite bed in the Burgess Shale, Canada.
Another thread came from the works of Hildegard of Bingen and subsequent series on gardens I made for seed installations and the series on O Rubor Sanguinis. Continuing the cosmos theme, I've employed Hildegard's stars of fallen angels and other star shapes and included portraits of her from the manuscripts which depict her visions. Having studied and performed her music for over 25 years through my participation in Seattle's Medieval Women's Choir, I frequently link her visual imagery with her musical compositions.
Finally, from works which linked reproduction issues in plants and women's rights, I used seed images and the image of Dr. Vandana Shiva whose activism to preserve open-pollinated seed strains is supported by plant biologists such as Dr. Alan Kapular who called seeds the jewels of the earth.

One final thread of inspiration comes from Doris Lessing's novel, The Making of the Representative for Planet 8. This Sufi tale of transitions in adversity dramatically visualizes the nature of the universe as multiplicity within unity. Using the mica pigment, minerals from the volcanic Cascade mountains, formally reiterates this quality.

I’m quite excited to be part of Museum of Northwest Art’s Surge Festival this September 26-27 in La Conner, Washington.
I’m preparing an aleatoric music performance determined by 8 singers whose movements indicate pitches within the Phrygian (medieval) mode. Singers may move between tones and contour lines using traditional musical ornaments. The contour lines would retain references to lands and increasing water levels in the Skagit Valley resulting from climate change weather extremes. Audience members are encouraged to join the singers as we push back the surge.
As a member of the Medieval Women’s Choir, I performed and studied with early music specialist Margriet Tindemans for 25 years. This is my first music performance piece and some choir members will participate.
Here’s the Surge Festival call; I’ll update it with the museum’s update
http://www.monamuseum.org/surge-festival-call-artists
I'm preparing a talk on my recent visit to Korea and study of Hanji, Korean paper and its craft and bojagi, Korea fiber arts.