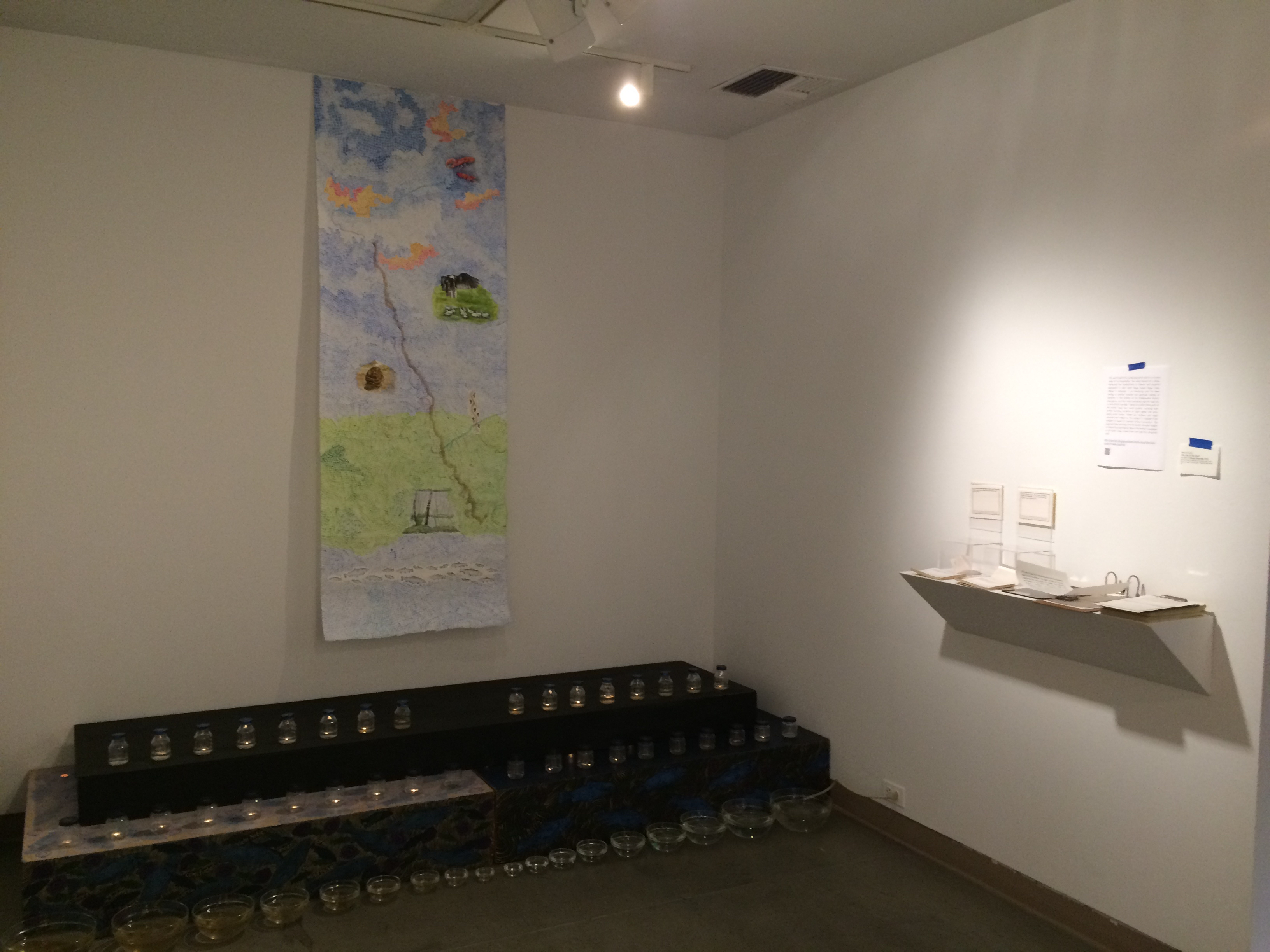 The Lay of The Land: A Tale of Skagit Marshes, installation view, Museum of Northwest Art, Surge, September 17-25, 2016
acrylic and mixed media on paper, wood, glass, water (from Skagit River delta), lights.
This work is part of a continuing series and is in a current stage of its completion. The work consists of a shrine, expressing the interactions of climate and estuarine ecosystems in the north Puget Sound. Roger Fuller offered a narrative : “…an interesting one I’ve been looking at [which] involves the dominant species of bulrushes in the estuary of the Stillaguamish [River], snow geese, and the many shorebirds and fish that rely on the bulrush marshes.” (email, 6.4.2016) Some parts of the estuary have lost marsh grasses, resulting from climate warming activities of snow geese and stem-boring moth larvae. Others are resilient and retain bulrushes and sedges as the estuary is restored from farmland to assist in juvenile salmon protection. The large scroll like painting, one of a series, includes studies of resident flora and fauna.

Ghost shrimp, detail from scroll, The Lay of the Land: A Tale of Skagit Marshes, Alice Dubiel, 2016, acrylic and mixed media on Hanji (korean paper), fabric
These include invertebrates such as ghost shrimp whose presence as eggs and larvae in the plankton provide food for juvenile salmon as they transition from freshwater to brackish water, and then to saltwater for their journey in the sea. Beavers have reemerged, appearing with increasing frequency in the Skagit Delta, as described by Greg Hood, and impact the sedge ecology, including salmon habitat. And the snow geese, and the occasional bald eagle appear as described by the Fuller narrative above. The shrine features small jars and bowls with water samples from the marshes showing turbidity relative to location and condition of the marsh. These jars are illuminated by little electric lights which shine through holes drilled in the boxes. An audience participation aspect, comprised of a shelf where I have some carbonless forms from previous installations for audience interaction. Finally, docents have a few reference articles by the scientists listed below.

I am indebted to Prof. Roger Fuller, Western Washington University, Bellingham, Alan Hamlet Greg Hood Eric Grossman and Carol Macilroy, all of the Skagit Climate Science Consortium for their generous sharing of information and resources during this project. I am grateful to friends including Cindy Bjorklund in supporting Skagit River research since a residency at North Cascades National Park in 2006. Cindy helped me access the sedges in a nursery/garden setting. I'm also grateful to my family, especially my husband, Jim Hopfenbeck for assistance in exploring the Skagit Marshes and collecting water samples. Finally, in a general way, I want to express deep appreciation to our indigenous residents who lead us in understanding the value and techniques of original residence on the land. We cannot trace a path toward a sensible symbiosis between humans and our environment without their patience, struggle and memory.

Scientific papers:
Papers include those by Prof. Roger Fuller, Western Washington University, Bellingham, Alan Hamlet, Ph.D., Department of Civil and Environmental Engineering and Earth Sciences at the University of Notre Dame, Greg Hood, Ph.D., Skagit River Systems Cooperative, Eric Grossman, Ph.D., USGS, and Carol Macilroy, Administrator, SCSC, all of the Skagit Climate Science Consortium for their generous sharing of information and resources during this project. Some are listed below; others are included in the resources section of the installation.